The Valve Core, also known as the power core by Twisted Alice, is a collectible item for one of the fetch quests in Chapter 3, and as unobtainable environmental items in Chapter 4 and Chapter 5 of Bendy and the Ink Machine.

These cores can be found inside valve panels upon completing their puzzles.

Equipping the plunger, Henry must head for Level P and collect all three valve cores after solving each puzzle to unlock the lids, then complete this task for Twisted Alice. Before obtaining each valve cores, Henry can turn three small wheels to fill or drain ink from all three tubes until the measurement goes to the black circles for each tube.

During this task, Striker is seen carrying a valve core with his extender bar. Henry needs to kill Striker before obtaining his valve core.

They appear as decorations on the table in the ballroom. It is impossible to pick them up.

There appear as inaccessible items in a prison on one of the shelves near the place where Henry was locked.

A valve core in its casing.

Valve cores in ballroom in Chapter 4.

Valve cores in prison in Chapter 5. 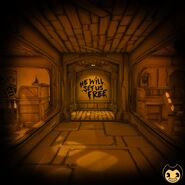 The valve сore machine in the background on the lobby area's screenshot, uploaded by Bendy from Twitter. 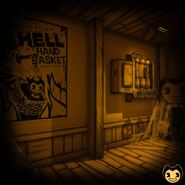 The valve core machine from one of the areas within the small workshop, uploaded by Bendy from Twitter. 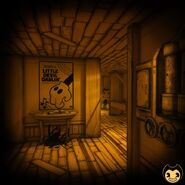 Another valve core machine in the small workshop, uploaded by Bendy from Twitter. 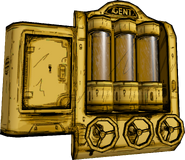 The valve machinery where the power core is located. 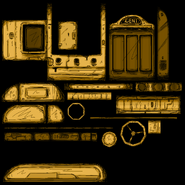 The valve core and it's casing's texture map.

An image of the valve core machine for the "Feeling the Pressure" achievement.
Русский
Community content is available under CC-BY-SA unless otherwise noted.
Advertisement