Sammy Lawrence (audio log)
Utility Shaft 9 also known as The Utility Room is a location in Chapter 2 from Bendy and the Ink Machine. As stated by Thomas Connor, it’s one of the off-limits utility shaft areas boarded off because of the ink pipes bursting.

Utility Shaft 9 is the entrance, where Henry enters into the Music Department hall.

The utility shaft itself was used for the studio's mechanics and menial workers to access the Musical Department without interfering with the other employees' jobs.

Behind the door of the room of the ritual symbol, there is a ladder that when Henry comes near a wooden plank falls.

When descending the stairs, the player finds the engraver of Sammy Lawrence and later a cutout of Bendy with a ritual symbol behind and the side of the cutout in the inky hall. 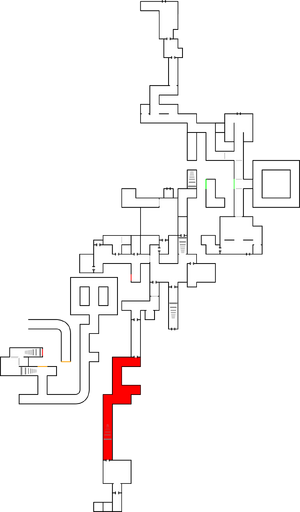