This article is about the series of objects. For the item based on one of the toys, see Bendy Doll. 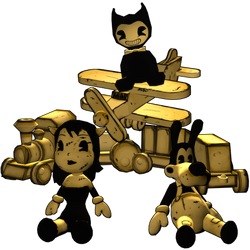 Toys are a series of objects produced by the Heavenly Toys company. In Bendy and the Ink Machine, they are first introduced from Chapter 3 onwards.

There are three known dolls based on the recognizable cartoon characters - Bendy, Boris, and Alice Angel. All dolls come in many sizes.

Besides the dolls, there is also a toy train and a biplane.

The toys are used as environment decorations for the Heavenly Toys room. Several broken toys are seen stuck in the belts of the toy machine room, preventing the said machine from working.

A lot more dolls of Bendy, Boris, and Alice are seen stacked in multiple shelves of the toy storage of Level K.

The toys reappear in the fourth chapter in several locations. The Boris doll makes a noticeable appearance in the Haunted House, standing in front of a lamp, giving it a shadow that looks like the one of the real Boris or a Boris clone. A toy train is also on a desk in the Maintenance.

Retrieved from "https://bendy.fandom.com/wiki/Toys?oldid=138865"
Community content is available under CC-BY-SA unless otherwise noted.