August 11, 2017 (first release)
January 7, 2019 (reupload)
Tombstone Picnic, the "Lost Ending", is a cartoon short of the Bendy cartoon series, officially released on January 7, 2019. It is the first cartoon created by the developers of Joey Drew Studios Inc.

In-universe, it is written and directed by Joey Drew, produced in 1929 since after the beginning establishment of Joey's animation studio, to coincide with Halloween. The cartoon was made in the early days of the studio whose ending (after the scene where Bendy sees the unknown figure) has not been seen since the cartoon's first run in 1929 and no copies are known to exist.[1]

The cartoon starts with Bendy walking in a field carrying a picnic basket. An arm pops up from the ground and grabs his ankle. He then struggles for a few minutes before the skeleton rises from the ground. The skeleton first winks at Bendy after letting him go, then goes back to its grave by pulling the ground over it like a blanket. Bendy becomes a bit confused.

He then looks back to see Boris eating one of his sandwiches. He angrily rolls up his "sleeves" then goes towards Boris, and tries to get his attention. Boris then grabs the picnic cloth and wipes his mouth while Bendy trips off the screen. He continues eating the sandwich while Bendy is trying to get his attention. Bendy then gets an idea to pull a prank on Boris. Bendy sneaks as he grabs a bottle of soda/champagne from the basket then shaking it and aiming it at Boris. Boris then becomes aggravated by Bendy's prank. Bendy then runs away, while the basket landed on Boris' head with raining several sandwiches. Boris then continues to eat.

The camera cuts to Bendy running away to the cemetery and hides behind a gravestone. He checks on a side with the skeleton on the other and checks the right side. Both see each other and Bendy gets frightened, then runs away. Bendy stops at a huge rock panting, while the shadow of an unknown figure covers him. Bendy nervously smiles at the figure, while the cartoon itself later ends by the projector's interruption.

With the other half ending up lost, what really happens next during Bendy's encounter with the unknown figure(later revealed by animator TimetheHobo to be Henry Stein) is currently unclear.

A title card for "Tombstone Picnic".

Bendy walking from the beginning of the cartoon "Tombstone Picnic" before getting grabbed by the skeleton.

Bendy being scolded by a skeleton in "Tombstone Picnic".

Bendy getting up and gave a scowl at Boris while he's eating.

Bendy walking towards Boris and slips away after Boris pulling the picnic blanket.

Bendy attempting to pull a prank on Boris.

Bendy spraying a soda pop at Boris then runs away.

Boris with a picnic basket falling unto his head and goes back eating a sandwich.

Bendy running away from Boris and then hiding behind a tombstone in "Tombstone Picnic".

Bendy and a skeleton character hiding behind a gravestone in "Tombstone Picnic".

Bendy and the skeleton scaring each other from behind the tombstone in "Tombstone Picnic".

Bendy encountering an unknown shadow at the end of "Tombstone Picnic".

Bendy with a creepy smile while looking at the unknown person before the cartoon ends.

Bendy from the higher quality version of the "Tombstone Picnic" scene posted by TimetheHobo. 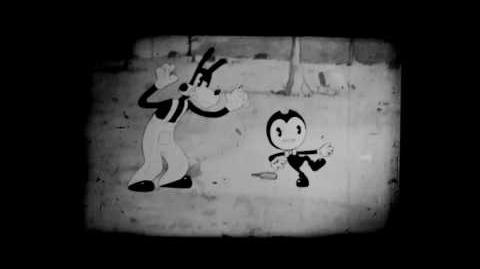