This article is about the book item. For the literature based on the item, see The Illusion of Living (Literature).

The Illusion of Living is a memoir written by animation studio owner Joey Drew. The book describes Joey Drew's life, along with the philosophy of making animated cartoons, ranging from the logic of animations to drawing Joey Drew Studios' cartoon characters in the owner's way.

The cover of the book is black, with a yellow outline, which contains the title, Joey Drew's name, and a pair of horns. The back cover is also pitch black. The pages appear to again, be black.

Note: this will have more items when the real-life version is released

The book first appeared in Chapter 1: Moving Pictures. It is one of the six items Henry must collect to fix the Ink Machine. The book is located in the Lunch Room, on a table piled with several other books.

The book later makes a numerous amount of cameos from the second to fifth chapter. However, none of them can be unobtained: 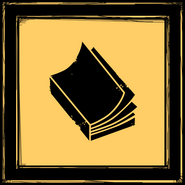 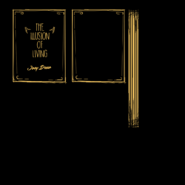 The book seen in the animated image for BATIM's 1 year anniversary.

The book from the Hot Topic video.

The book in an image for the countdown to Chapter 5's release.