This article is about the location in Chapter 4. For the special location, see Chapter ?: The Archives.

Lost Ones (statue)
The Archives, also known as The Library is a location on Level S in Chapter 4: Colossal Wonders of Bendy and the Ink Machine.

According to the Joey Drew Studios Employee Handbook, the Archives were built to preserve much of, if not all, of the studio's documented work, including audio logs, character reference, cartoon transcripts, registries of ideas from staff meetings, autographs from famous Hollywood stars, and almost every much of the studio's most valuable possessions, which are kept in safes. Reels of the cartoons themselves are not kept in the archives, since the Film Vault was built for the purpose of preserving them.

The Archives are composed with two circular rooms.

The first one contains a raised platform with a Bendy statue in the center, there are Lost Ones standing motionless in dramatic poses all around the statue. Above the said statue, there is a sign with the message "HE WILL SET US FREE". On the ceiling of this room, a giant image resembling Sammy Lawrence's mask can be seen.

The second one is a library with books shelves and safe vault all around the wall. The middle of the room is surrounded by bookshelves with in the center a table with an audio log in it. There is a chandelier in the ceiling.

At first, the door to the Archives is locked, and Henry must search for a turnwheel in the Management Office.

When entering this room, Henry meets the Lost Ones for the first time, they are seen standing motionless, the lightning turns on and a music box starts to play a peaceful melody. When Henry leaves this room and then come back, they're all gone.

In the library, there is an audio recording of Susie Campbell, in her audio log, presumably being recorded after she had been replaced by Allison Pendle, she remarks how Joey Drew is saying things "behind closed doors" about her and that he wants to give her a new opportunity. Although this, Susie says she have something planned for Joey and reassure how Alice doesn't like liars.

The exit from the Archives is locked as well, to progress, Henry must find 5 books sticking out of the shelves and push them back in lighting up lights above the exit.

When pushing one of the books in the middle of the library section, Henry will experience a brief disruption in which a shriek disturbs his vision, the safe vaults' doors and the chandelier appear to be shaking before return back to his own consciousness and complete the task for opening up the exit. 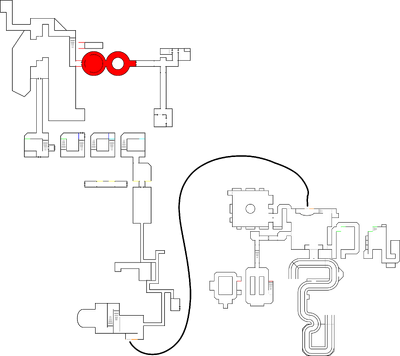 The entrance to the Archives.

The Bendy statue surrounded by the Lost Ones.

Bendy Statue after the Lost Ones have disappeared.

The library of the Archives.

Some books in the Archives.

A shelf in the Archives.

The exit to the Archives.

The Archives as seen in the trailer.

Henry looking at the chandelier while experiencing a horror vision.

A view of the Archives. 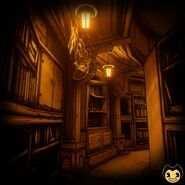 The official screenshot of the Archives.