The T-Shaped Corridor page does not have a canonical name. This name will be used until the official name is confirmed.

Sammy Lawrence
Searchers
The Neighbor (Hello Bendy)
The T-Shaped Corridor is a hallway location from Chapter 2 in Bendy and the Ink Machine.

From the start, a long hallway is flooded with ink, with wood planks on both sides, flickering lights, pipes, and an open door at the end. A Few streams of ink fall down from certain parts of the hallway's ceiling.

At the end is a corridor-like room as a straight hall pointing west and east. From the left, there is a shelve filled with numerous cans of Bacon Soup, a Bendy cutout standing in front of the pentagram, and "The Dancing Demon" poster. From the far right, there is a control machine pad and the entrance to the Music Department entrance.

Following after enter the utility shaft 9, Henry has to wade into the ink, to reach the open door at the end of the hallway. Walking through the hallway that hindered his movement. Right before he reaches the door, Sammy Lawrence as a monster walks past carrying a Bendy cutout, but disappears before Henry can confront him.

Before activating the switch to open the Music Department's entrance, Henry must locate and activate three buttons from random locations. The first statue of Bendy can be found here for respawning after death.

A Searcher can spawn at the ink hall after the power is turned on from the Music Department. 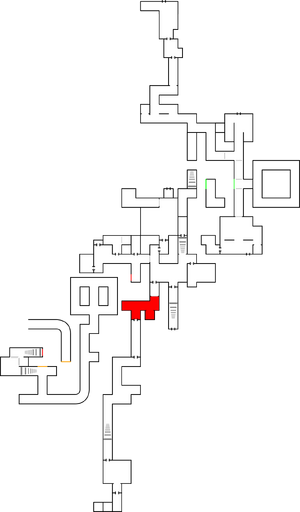