Equipment ({{Tt|BatIM|Bendy and the Ink

The Syringe, also known as the Ink Syringe, is both a weapon and a tool from Chapter 3 of Bendy and the Ink Machine.

This tool seems to be based on a late romantic-era style syringe, with a long sharp needle and a large tank. It is sepia toned, and has a black needle.

The syringe is used for collecting extra-thick ink from Swollen Searchers, as well as being used as a weapon.

The syringe is given to Henry by Twisted Alice and is used for collecting extra-thick ink and defending against enemies. It is not used again after completing the task of collecting all three blobs of extra-thick ink. 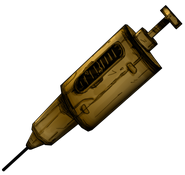 The syringe about to be used on a Swollen Searcher.

The syringe on a table in the "Path of the Angel" cutscene.