This article is about the type of gear. For the original type, see Gear.

The Special Gear is a type of gear and an item from Chapter 3 of Bendy and the Ink Machine.

The special gear's design is very similar to that of the original gear, both being sepia, but it is much smaller. It has seven cogs, similar to the orginal gear in Boris and the Dark Survival, however, the gear has ten cogs in the original Bendy and the Ink Machine. In the middle is an O-shaped hole connected to two thin metal bars. When compared to the original gear, it has a more oily and less scuffed appearance.

During this task, Piper is encountered using the special gear for his left arm and will drop it upon death. 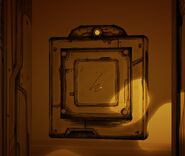 The special gear in the machine box. 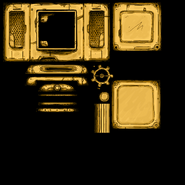 An image of the special gear for the "Spare Parts" achievement.
Русский
Community content is available under CC-BY-SA unless otherwise noted.
Advertisement