Miner Searcher
The Ritual Room is the last room from Chapter 1: Moving Pictures and the starting location of Chapter 2: The Old Song in Bendy and the Ink Machine. It is located at the lower level after the basement.

Whenever an employee died on the job, their bodies would be stored in coffins and placed elaborately in the room itself.

The room contains a ritual symbol drawn on the floor with ink surrounded by five candles. There are also three coffins; two laying against the wall and the other on the floor. There are also three chairs; one from the left side and two others from the right. There is a shelf located on the left side of the room. A "The Dancing Demon" poster is printed on the wall, and from above the right side is a pipe.

On the left side, there is a door which leads to the Utility Shaft 9 location, but it is blocked by three boards.

The door entrance is also blocked by three boards.

Walking towards the room allows the player to complete Chapter 1. As soon as opening the door after breaking down the boards, the room will cause the ground to shake. The last can of Bacon Soup from this chapter can be found in the lower part of the shelves located from the room's left side.

Henry collapses into unconsciousness after suffering from several flashbacks caused from an unknown tremor after standing upon the ritual symbol long enough.

From the beginning of Chapter 2, Henry regains consciousness and gets up. Then he retrieves his axe which is found leaning against the first coffin and continue his journey after chopping the boards down from the utility shaft 9's door.

A Miner Searcher can spawn on the ritual symbol room after turning the wheels from all two ink valves in Sammy's sanctuary and the Infirmary.

If the player returns here and uses the Seeing Tool after completing the game, Norman and Grant are mentioned on the coffins, suggesting that they are dead, probably due to them having their souls used by the Ink Machine. 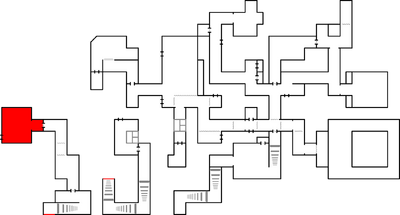 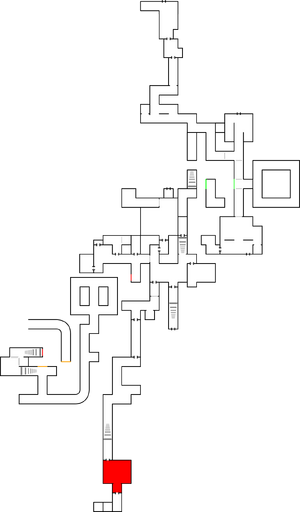