View source
watch 02:52
Roblox: DeepWoken - The Loop
Do you like this video?
Play Sound

Playing music in the phonograph,
Fixing the Ink Machine (BATIM)

Mitchell Orchestra Company
The Record or The Vinyl Record is a gramophone vinyl sold by the Mitchell Orchestra Company. In Bendy and the Ink Machine, the record is used as an item from the very first chapter. In Boris and the Dark Survival , it's one of the items found in Boris and the Dark Survival One of the records is also visible in the phonograph.

It is a disc record. Its label reads "Bendy" in bold black letters. The title of the song is "The Lighter Side of Hell".

The record first appeared in Chapter 1: Moving Pictures. It is one of the six items Henry needs to collect for fixing the Ink Machine. The record is located in the Small Office, under the desk.

In Chapter 2: The Old Song, several records appear as decoration for the Music Department's logo, with one of them that seems to go missing.

The record is one of the randomly generated supplies that Buddy Boris needs to collect before he heads to the next levels. But Henry cannot interact with any of them 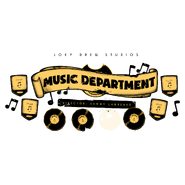 The record as seen on the music department logo in Chapter 2.

The record as seen from Chapter 2's ending image of pre-update. 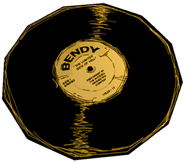 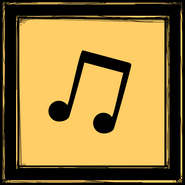 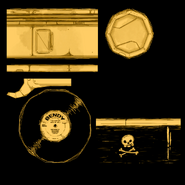 The record's texture map along with the ink jar and wrench.

The record seen in the animated image for BATIM's 1 year anniversary.

The record from the Hot Topic video.

The record in an image for the countdown to Chapter 5's release.

Phonograph in Boris and the Dark Survival playing the record.
Polski Русский
Community content is available under CC-BY-SA unless otherwise noted.
Advertisement