The punch card stand is a save system located throughout the chapters of Bendy and the Ink Machine. Interacting with it automatically saves the player's game progress, and will cause Henry to say random lines.

It has the appearance of a normal punch card stand with a clock on it, with the "TIMEKEEPER" text above the clock. There is usually a poster next to the stand with a text that says "DON'T FORGET TO PUNCH IN! IT COULD SAVE YOUR JOB."

The punch card stand can be found in the lunch room.

The punch card stand is located next to Wally's closet.

A couple of more punch card stands appear in Chapter 3, located at the Heavenly Toys room and the entrance from Level 9's inner chamber. This is because the chapter is much longer than the previous chapters, and much harder in difficulty due to spawning more Searchers and Butcher Gang enemies as well as Ink Bendy constantly appearing in the chapter.

There's a punch card stand found at the bottom of the stairs in the Storage 9 location.

A punch card stand can be found in the Administration lobby.

The stand from Chapter 1. 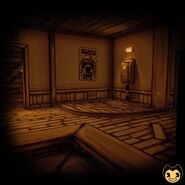 A texture for the punch card stand. 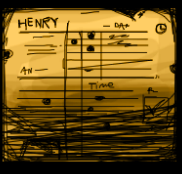 Henry's punch card.
Add a photo to this gallery
Retrieved from "https://bendy.fandom.com/wiki/Punch_Card_Stand?oldid=139009"
Community content is available under CC-BY-SA unless otherwise noted.