The Projector Closet page does not have a canonical name. This name will be used until the official name is confirmed.

Bendy (miniature cutout)
The Projector Closet is a small room found in Chapter 1: Moving Pictures of Bendy and the Ink Machine.

This closet was set up to store spare projectors in the event any of the projectors already in use break or stop working.

The closet itself is small and contains nothing but a shelf with cob-webs. The shelf is filled with projectors, some tape reels, and a miniature Bendy cutout. There are few ink-stains covering one of the walls and paper sheets behind the shelf.

It is located near the entrance of the Theater. There is a single can of Bacon Soup that Henry can find, located on top of one of the projectors from the shelf's first section. 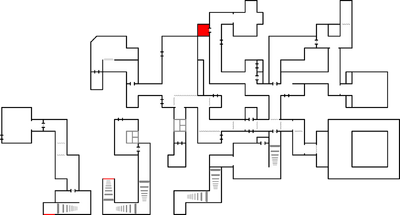 The Bacon Soup can.