Bendy and the Ink Machine (Chapter 1: Moving Pictures)*
The plunger is a plumbing tool used for clearing blockages in drains and pipes. It acts as both an equipment and item in the Bendy series.

The plunger appears to be a used sink plunger. It is seen with marks along the bottom and a wooden handle with two scratches and darker top section.

The plunger is supposedly used to unclog sinks, but is not used this way in the series.

In Bendy and the Ink Machine, its usage is similar to weapons like the axe and Gent pipe, but weaker, as it can be used to kill the enemies, but takes far more hits than the two aforementioned weapons.

The plunger is first seen in the boarded toilet of the Animation Department. Henry can't enter the room, and even by using hacks to access the room, the plunger is unobtainable.

The plunger is first seen at the beginning area of the safe house, where it is found in the restroom area, however, Henry is not able to obtain it. Later on, it is used for completing the task for Twisted Alice where Henry needs to find three valve cores, and can also use to kill the Searchers and the Butcher Gang enemies.

The plunger is later found as a secret item used in the battle against Brute Boris. To get it, first power up the Haunted House. Then return to the Maintenance department, where the Projectionist was. Go upstairs and open the chest to the left of the lever and take the wheel inside. Later, after the battle against Brute Boris has started, interact with the selection wheel on the Ink Maker to replace it. Henry can now select the plunger to be created instead of the Gent Pipe, but defeating Brute Boris is more difficult with it.

The plunger is one of the randomly generated supplies that Buddy Boris needs to collect before he heads to the next levels. 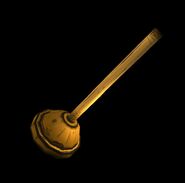 The plunger's image revealed by theMeatly during Chapter 3's development. 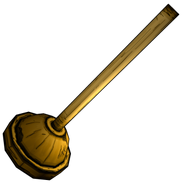 Henry with the plunger on Level P.