Office of Sammy Lawrence, also known as Sammy Lawrence's Office or simply Sammy's Office is a location from Chapter 2 of Bendy and the Ink Machine. It is the office owned by Sammy Lawrence, where he wrote the music and ditties for the Bendy cartoons.

Sammy's office consists a sign above the outside window. Inside is a switch that says "PUMP CONTROL" and a desk to the right of the room. On the desk is a radio that can be activated.

Outside from the office's entrance, there is a Bendy cutout, a pair of posters, and Wally Franks' second audio log located on top of the shelf. There are also few pipes spilling a load of ink at the door and both are disabled when all two ink flow valves are activated. Away from the office and next to the closet is the punch card stand.

The office is found at the back of the hallway. Sammy's office is necessary for the completion of Chapter 2, when Henry first comes here he will note that he needs to drain the ink leak in front of the door. After draining it via the switch from Sammy's sanctuary and inside the infirmary, Henry is able to come back and enter the office and pull off the pump switch, allowing himself to take the stairs and escape from the underground through the exit door, before he can go there, only to be knocked out by Sammy himself in his corrupted form, before being dragged into the sacrifice room as an offering to Ink Bendy. 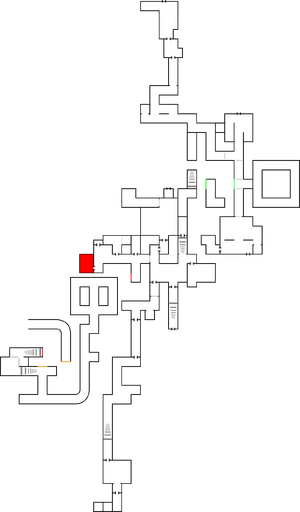