The Music Radio is a radio used for playing music and songs.

The music radio’s design's are based different iterations of the Crosley Cathedral radio.

Interacting with the radio will play an instrumental soundtrack.

In Bendy and the Ink Machine, an instrumental and shortened version of a fan song is played, except in the fifth chapter where it plays an official song. The radio can't be played again after the song has finished. It can only be found once per chapter.

The radio is one of the randomly generated supplies that Buddy Boris needs to collect before he heads to the next level(s).

The radio will reappear in Bendy and the Dark Revival.

Bendy and the Dark Revival = 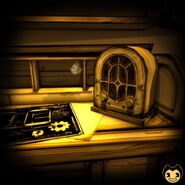 The official screenshot of the music radio in Sammy's office.
Русский
Community content is available under CC-BY-SA unless otherwise noted.
Advertisement