View source
watch 03:01
Wiki Targeted (Games)
Do you like this video?
Play Sound

The room consists of the logo for the Music Department with music notes and records (although one of the records are missing). The room also consists of two radios from above, a Bendy cutout from the right side, and Sammy Lawrence's first audio log while he was still human.

From the right side, there is a small room containing Alice Angel's "Sent From Above" poster, a garbage can, and a board.

From up north of the left side where the entrance to the recording studio is located, there is a rectangular-shaped screen with the word "RECORDING" flashing that can only happen after finishing off the Searchers for the first time.

The stairwell consists of a single flight of stairs and a door that leads to the exit, with the stairwell flooded with ink. From the ceiling are few pipes. It is also the place where the "POWER" switch is located, from the right side of the entrance. Additionally, a Searcher can be found here.

This room is after solving the puzzle of the gate. This room is connected to all other rooms: recording studio (north), projector booth (north), Sammy's office (west), Utility Shaft 9 (south), pool room (east), and exit stairwell (south).

The main objective is to drain the ink from the stairwell in order to get to the exit.

Later on when Henry tries to make his way to the exit after activating the pump switch from Sammy's office, Sammy himself shows up unexpectedly behind Henry and knocks him out with a dustpan before kidnapping him for the sacrifice of his so-called "lord" and "savior". 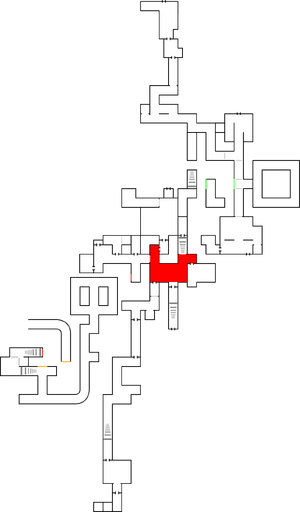