The Metro Station page does not have a canonical name. This name will be used until the official name is confirmed.

Ink Bendy
Fisher
Swollen Searchers
The Metro Station is a location from Chapter 3 of Bendy and the Ink Machine, and the first area of Level 11.

The room's structure is slightly similar to a subway station in design. The entrance room contains a statue of Bendy at the left near the elevator. Away from the locked box and the wooden barrel, there is a punch card stand. There is also a door connecting to the stairways.

The hall leading to the entrance to the waiting room contains a river of ink and Little Miracle Station next to it. From the hall away from the ink river's start are windows with machinery behind.

It is one of the areas in Level 11 where Henry has to hunt down Swollen Searchers for thick ink to complete Twisted Alice's task.

This is also the location where Fisher appears.

Ink Bendy can randomly appear in this area, going through the Ink River.

If you cross the Ink River and look at the long window to Lunch Room 2, you can see The Projectionist skulking past the window and disappearing around the corner, where there's a locked gate forbidding the player to enter. 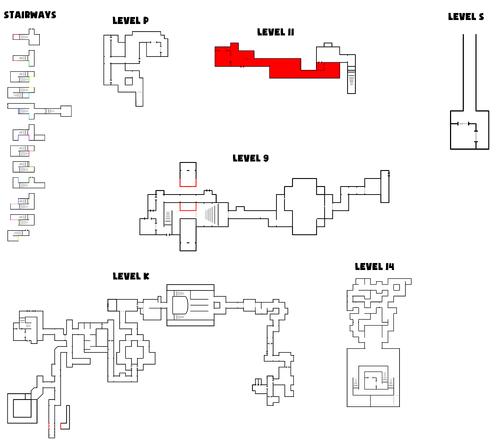 Another view on Level 11.

Level 11 from one of the screenshots for Chapter 3.

Ink Bendy running towards Henry, who is shooting him with the Tommy gun.

Another screenshot of Level 11.