This article is about the location. For the location in the third chapter of the first game, see Lunch Room 2.

Punch Card Stand
Bendy cutout
The Lunch Room, also known as The Rec. Room is a location from Chapter 1: Moving Pictures of Bendy and the Ink Machine.

Based on the layout, this room served as a break room to fill the gap left behind when the previous break room was converted to house the Ink Machine's switch and pedestals.

It is a large room containing a couple of round tables with chairs. It is where Chapter 1's only punch card stand is located. There is a door leading to the small closet with a few cans of Bacon Soup, and a hallway that leads to a boarded up cellar.

From one wall, is a dartboard that allows Henry to throw darts at it like some sort of minigame.

The door leading to the pub room is accessible while solving the puzzle to fix the Ink Machine. The door locks itself again after all the puzzles are solved.

This is the location where The Illusion of Living book is found, located on one of the round tables with several other books.

After breaking the scythe and complete Chapter 5 without dying, the cellar is no longer boarded up, with the trapdoor opened for Henry to jump in. Inside it reveals a doorway leading to an inky tunnel similar to when Henry dies. Reach the other side and Henry will be teleported to the front door with his visions in black and white instead of the usual sepia. 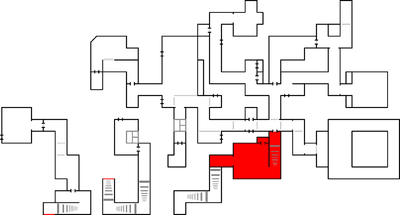 A view of the pub room.

A Bendy Doll in the pub room before Chapter 4's update.

An updated view of the room.

The stairs leading to the pub room.

Another view of the pub room.

Bendy on the floor of the pub room.

Bendy stuck in the floor of the pub room.

The end of the hallway further inside the pub room.

Ditto, but in a later update.

The inside of the blocked off area.

A view of the blocked off area in the pub.

The punch card stand in the pub room

The book in the room.