This article is about the cartoon. For the soundtrack, see Little Devil Darling.

1929
Little Devil Darlin' is a Bendy cartoon produced by Joey Drew Studios and presented in Sillyvision. It is the first Bendy cartoon releasing on 1929 since the studio's establishment.[1]

The plot of this cartoon is unknown, as there is no clip for it, and the poster doesn't reveal anything about the cartoon.

A prototype version of the poster for Bendy and the Ink Machine. 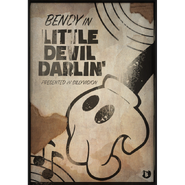 A realistic, worn down version of the poster seen in Joey Drew's apartment from the epilogue of Bendy and the Ink Machine.

The merchandise version of the "Little Devil Darlin'" poster.