Instruments are a series of musical objects that the player character can interact with in Chapter 2 and 3 of Bendy and the Ink Machine and Boris and the Dark Survival.

There are six types of instruments: the banjo, violin, bass fiddle, drum, piano, and pipe organ.

They make a respective instrument sound when interacted with by pressing "E". 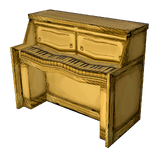 The instruments in the recording studio are the key to solving Sammy's music puzzle in order to gain access to Sammy's Sanctuary.

To solve the puzzle, the player must interact with the instruments in the order mentioned in one of Sammy Lawrence's audio logs while having the projector in the projection booth turned on.

A banjo can be found in the safe house, near the kitchen, sitting next to Buddy Boris. Some drums, violins, bass fiddles, banjos, and a piano are also found in the stairs close to Level 11. If they are played in this order:

It is possible to hear the voice of Sammy saying:

A pipe organ can be seen in the ballroom. However, Henry cannot interact with it since the instrument appears to be damaged.

The instruments come back in Boris and the Dark Survival. They can be interacted and make some music. In the Symphony of Shadows update, they're needed to unlock a secret audio log. 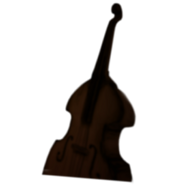 The violin as seen on Chapter 2's title screen.

The organ as seen from Steam.

An image of the organ. 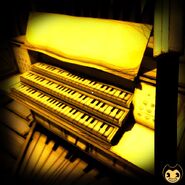 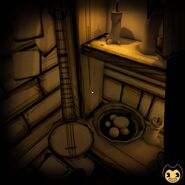 The banjo in Utility shaft seem from the game's twitter.

The instrument's texture map along with several other items. 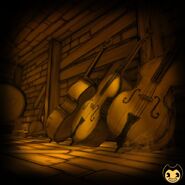 Bass fiddles from one of the stairways of Chapter 3, uploaded by Bendy from Twitter.

The pipe organ seen in Chapter 4.

Banjo seen in Boris and the Dark Survival.
Русский
Community content is available under CC-BY-SA unless otherwise noted.
Advertisement