This article is about the location. For the object, see Ink Machine.

Apparently the area where the machine was to be used most, the large studio loading dock, as the name implies, serves as the location where goods come and go within Joey Drew Studios. It doubles as a secondary housing for the Ink Machine to be operated by the studio's menial workers and mechanics of the company known as Gent.

The inaccessible lift/dock area is the largest section of the room, cluttered with various pipes, barrels and crates scattered around the area. The titular machine's lift mechanisms can be seen on the left side of the room, along with a planning board and large pallet of cement bags. There is a massive door at the back of the dock, supposedly from the delivery of the Ink Machine itself. In the center of the dock, there is a large shaft which the Ink Machine can be lifted out of by numerous chains. The shaft passes through a hallway leading to Sammy Lawrence's lair, the trailer room, the spiral stairway and opens up above the giant Ink Machine, where the Ink Machine stops descending.

The only accessible area in this room is a balcony near the top, with a lever that powers the lift. On the left side, there is a Bendy cutout, a shelf and a chest. On the right side, there is a barrel and a plug box with two battery slots. A pipe can be seen in the back with a "DANGER: KEEP OUT" sign above it.

In between the hallway and the balcony, there is a small hallway. Near the hallway, there is a barrel and some ink cans. In the entrance, an "Ink Output Schedule" chart signed by Thomas Connor, which states that the Ink Machine used 423 gallons (or roughly 1,601 liters) in one week. There is a pipe in the middle of the floor which says "WATCH YOUR STEP". Near it, there is another "DANGER: KEEP OUT" sign and a dresser.

This is the place where Henry must visit before heading for the break room. To pull the Ink Machine out, Henry must find two batteries on the balcony. One is on the shelf, and the other is in the chest. Henry must collect six items scattered throughout the workshop, restore the ink pressure in the projector room, then finally switch it on via a switch in the break room for activating the Ink Machine.

Two items can be found in this room:

Upon re-visiting the room after activating the Ink Machine by pulling the switch in the break room, Henry notices the entrance blocked by multiple boards. The floor within this room is also covered with several ink stains, a result by the activation of the Ink Machine itself. Ink Bendy suddenly pops out behind the blocked entrance and knocks Henry over before the entire workshop starts flooding with ink. 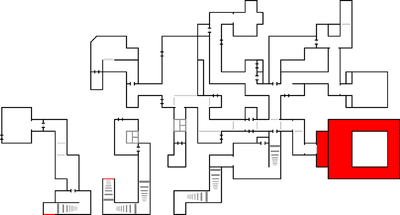