Searchers
The Infirmary is a location from Chapter 2 in Bendy and the Ink Machine.

Provided they were not faking illness, given the warning on the wall above the stairwell leading to the infirmary itself, the infirmary served as a clinic-of-sorts for employees with special needs or employees who have suffered debilitating injuries and/or illnesses on the job. Based on the layout, the infirmary also has the proper facilities required to test eyesight.

The infirmary is located from the hallway near from the door that leads to the organ room. The stairs leading down to the other floor is flooded with ink without activating the first ink flow from Sammy's sanctuary.

Turning the first ink flow from the sanctuary and wiping out the second wave of the Searchers drains the pool of ink from the bottom floor of the infirmary, allowing Henry to find and activate the other ink flow valve in order to drain ink from the entrance to Sammy's office. A Searcher can also spawn here. 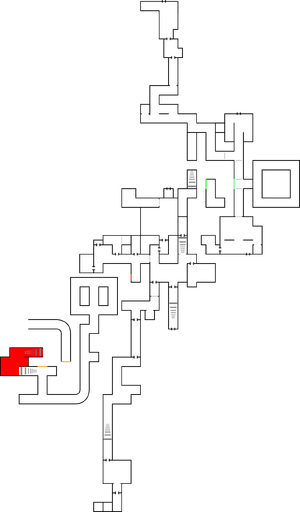 A view of the drained infirmary.

The Bendy Cutout in the room.

A view in front of the infirmary with the sunken stairs.

A view of the infirmary as of Chapter 3's update.

The entrance of the Infirmary as of the remastered trailer.

The inside of the Infirmary as seen in the remastered trailer.

The lever in the room as seen in the remastered trailer.

Blocked staircase at the end of the room in the Chapter 2 pre-update.

The inside of the infirmary from Chapter 2's first release.

Henry outside the room before Chapter 3's release.