The Hall Closet page does not have a canonical name. This name will be used until the official name is confirmed.

The Hall Closet,[1] also known as Janitor's Closet or Wally's Closet, is a location in Chapter 2 of Bendy and the Ink Machine.

It is a small closet with three shelves. The middle shelf contains a cassette tape with a recording from Sammy Lawrence, some non-lighted candlesticks, a bowl of spheres, and four obtainable cans of Bacon Soup.

Wally Franks mentions in his second audio log that he cannot find his keys anywhere before opening the closet's door for the dustpan.

The closet can be only opened with a key which can be found from one of the garbage cans. After finding the keys and opening the closet beside Sammy's office, Henry will find a voice recording of Sammy Lawrence, which gives him a hint about the upcoming music puzzle.

Wally's dustpan is later stolen by Sammy Lawrence to use when hunting for Henry, as noticed when visiting the closet again after activating the pump switch from Sammy's office. 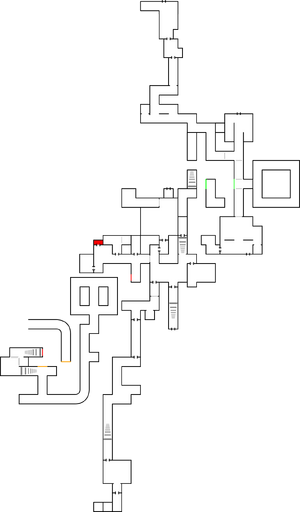 A view of the closet. (old version)

A voice recording of Sammy Lawrence about the music puzzle. (old version)

A voice recording of Sammy Lawrence about the music puzzle. (new version)

Dustpan in this location.

The dustpan's leaked image during the development of Chapter 2's remaster.