The pipe consists of two separate pipes connected together, one curved, and one straight, with small scratches, dents, and scuffs all over both. The word "GENT" is printed on the connector piece of the item. It is covered in scratches.

The pipe is used similarly to both the axe and the plunger, as it is used to kill enemies such as Searchers, Butcher Gang enemies, etc.

The pipe is first given to Henry by Buddy Boris after leaving the path that the player chooses to take, and as the chapter progresses it is replaced with the many tools and weapons given to the player by Twisted Alice.

In this chapter, it was created by an Ink Maker and used during the boss fight against Brute Boris towards the end of the chapter and must be replaced with another one every time it breaks after damaging Brute Boris. Tom is seen holding the pipe as well.

The Gent pipe is the first weapon in this chapter, been inside the bathroom in the prison. The pipe is used until it breaks after the Sammy Lawrence fight. The Gent pipe is also one of the weapons used by the Lost Ones during their attack. A large replica of the pipe is seen on the wall over the door that takes to the Gent Home Office. The concept art of this weapon appears on one of the sketches in the Joey Drew's apartment.

The Gent pipe is briefly seen on the workshop table in the gameplay trailer of the game.

In the 2020 trailer, Audrey is seen using the Gent pipe to defend herself against Lost Ones, although it appears covered in ink.

Henry holding the Gent pipe while he and Buddy Boris wait for Twisted Alice's door to open.

The pipe being used in Chapter 4.

Henry holding the Gent pipe while the Giant Bendy Hand appears from the ink. 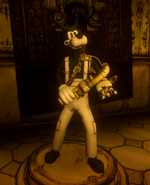 A statue of Tom with a Gent pipe. 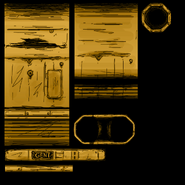 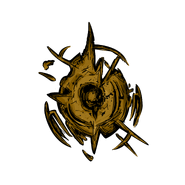 Texture of a mark left by the Gent pipe. 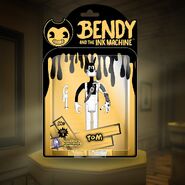 The action figure of Tom with the Gent pipe.
Community content is available under CC-BY-SA unless otherwise noted.
Advertisement