This article is about the item. For the related item, see Special Gear.

The gear is colored light yellow, and marks on the gear imply that it is made of metal. It had ten cogs in Bendy and the Ink Machine, and seven cogs in Boris and the Dark Survival.

First appearing in Chapter 1: Moving Pictures, the gear is one of the six items needed to fix the Ink Machine. The gear can be found in the chest on the Ink Machine's room balcony when finding one of the dry cells but was not obtainable at first until Henry starts the quest on finding the required items.

Multiple gears have appeared in almost every chapter.

Gears are one of the randomly generated supplies that Buddy Boris needs to collect before he heads to the next levels. 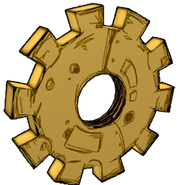 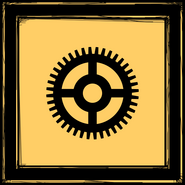 The gear from the Hot Topic video.

The gear in an image for the countdown to Chapter 5's release.

The gears in the "Swimm'ink Pool" fanart for official T-shirts by SKY-Lia.
Русский
Community content is available under CC-BY-SA unless otherwise noted.
Advertisement