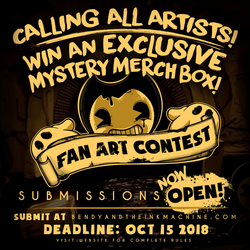 The fanart contests are series of events where fans can submit their Bendy fanart. The winners' fanart will appear in games or apparel products, and they will also receive rewards such as free copies of the game series or a mystery box filled with merchandise.

The fanart contest began on September 6, 2018, and ended on October 15, 2018.[3] However, their fanart will not appear in Bendy and the Ink Machine: Chapter 5 - The Last Reel due to content lock.[4] Instead, they are featured as limited-time T-shirts from the online store's Fan Built section.