The Dissection Room page does not have a canonical name. This name will be used until the official name is confirmed.

The Dissection Room, also known as The Coat Room is a location from Chapter 1 of Bendy and the Ink Machine. It is the room where the corpse of one of the Boris' clones is located, tied to an operation table.

The dissection room is a large room with a surgical table, with the dead body of one of Boris' clones strapped down on it. Behind the table is a large stain of what appears to be ink. In front of the table there are 2 candles, and on the right wall there is a message written in ink that says "WHO'S LAUGHING NOW?", there is also a chair on the right side of the room.

On the left side there is a closet with a small puddle of ink from the side.

It is one of the several rooms in the workshop that Henry is able to explore. A few of the items appear here, each being randomly placed upon booting up the game.

The room containing theMeatly's easter egg can be found here, only accessible after activating the Ink Machine to complete the puzzle. A wrench can be found inside of the Boris clone's chest incision. 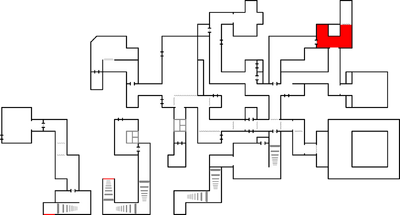