A series of freely distributed Bendy demos are published to help consumers thinking of a game before deciding whether to buy the full version and/or keep it.

A Bendy and the Ink Machine demo can be downloaded online in Itch.io for free. It is released shortly after all of the five chapters are completed for the full game.

The demo only includes the first chapter; Chapter 1: Moving Pictures. It takes over 10 minutes or less to complete the demo. Upon finishing the demo, the ending displays the screen message: 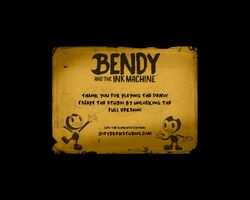 Before the release of Chapter 4: Colossal Wonders , a demo of it was available at PAX West, although, the demo only lasted until when Henry pulled the first lever on the Research and Design room, where he would turn backwards, where Ink Bendy would catch him, and at that moment the demo would end.

Retrieved from "https://bendy.fandom.com/wiki/Demos?oldid=127800"
Community content is available under CC-BY-SA unless otherwise noted.