The Break Room, also known as The Pedestal Room is a location from Joey Drew Studios in Chapter 1 of Bendy and the Ink Machine.

As the name suggests, this was once an area where the workers would take their breaks between shifts. It was eventually repurposed during the holiday season of an as-of-yet unknown year, for the ritual involving the donation of items to "appease the gods" as Joey Drew words it.

Above all pedestals are light-bulbs, and will automatically turn on upon putting the items onto the pedestals. All lights will shut off upon pulling the switch. At the end from between both pipes is a switch, with a sign from above labeled "INK MACHINE".

The break room is the area where the Ink Machine is activated via a switch. Henry must acquire six objects to restore the ink pressure; an inkwell, a book (entitled "The Illusion of Living"), a Bendy doll, a gear, a wrench, and a record (entitled "The Lighter Side of Hell"). After collecting all items or one by one, Henry has to put the items manually onto the pedestals before preparing to activate the ink flow from the theater room. 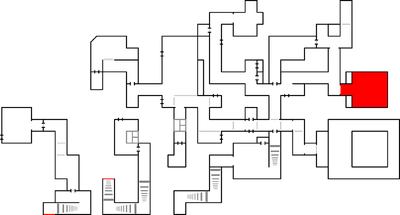