The Bone is an item associated with Boris-lookalike characters (Buddy Boris and Tom) of the Cycle.

The bone itself is actually a femur from a human skeleton. It's yellow in appearance, with black lines in random places.

The bone is one of the randomly generated supplies that Buddy Boris needs to collect before he heads to the next levels. There's also a hidden bone found in one of the lockers, known as "Boris's Special Bone". Once obtained, Buddy Boris will chew on the bone throughout the whole game until the game is restarted.

Buddy Boris with the bone in his mouth.

Bones from the stairways.

Henry viewing Tom with the seeing tool and he is holding a bone.

Close up view of the bone in Boris' mouth.

Brute Boris with a bone in his mouth.

An image of the bone for the "Knick-Knack Paddywhack" achievement. 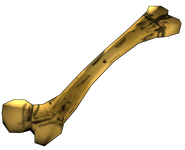 Boris with the special bone in his mouth in First Person view by hacking.

The bone in Brute Boris' mouth in the Happy Thanksgiving image.

The bone in Buddy Boris' mouth from the Bendy Royale trailer.
Русский
Community content is available under CC-BY-SA unless otherwise noted.
Advertisement