Start a Wiki
watch 00:57
'Bendy and the Ink Machine' Teaser Trailer
Do you like this video?

Bendy and the Ink Machine (abbreviated as BatIM) is an episodic first-person puzzle action horror video game and the first installment of the Bendy series developed by Joey Drew Studios Inc. through Kindly Beast, lead by theMeatly and Mike Mood. The game was released on GameJolt and Itch.io on February 10, 2017, and was first officially released on Steam on April 27, 2017. The chapters ran from February 10, 2017, to October 26, 2018.

The game follows Henry Stein, a retired animator who returns to the defunct animation company upon an invitation from his old friend Joey Drew, then, later on, he discovers a living nightmare within the studio by the chaos of ink, thanks to the titular Ink Machine. Traveling through the deep underground levels under the studio, it reveals more as the chapters proceed.

"Bendy and the Ink Machine" is a first-person puzzle action horror game that begins in the far days past of animation and ends in a very dark future.
Take on the role of Henry, an animator from long ago, returning to a forgotten place he never thought he would see again.
What follows.. is a mystery.

Bendy and the Ink Machine is a survival horror game that features a mixture of puzzle solving, environment exploration and combat to aid Henry on his journey through the darkened halls of Joey Drew Studios. Players explore through a first-person view and have limited physical actions such as running and jumping. Different items can be collected, some of which are required to perform various tasks before proceeding. Cans of Bacon Soup, a reference to the game's creator theMeatly and his partner Mike Mood, can also be collected for achievements and to restore Henry's health if he is injured.

Combat is primarily focused around a variety of different melee-based weapons, such as an axe, pipe, plunger, or scythe. There are also long-range weapons such as a Tommy Gun or Empty Bacon Soup cans. In-game enemies all have different strength levels and resilience to damage, forcing players to be tactical about keeping out of reach and striking when necessary. Failure to do so will result in a death. Henry can retreat inside Little Miracle Stations whenever enemies are nearby in order to recover or remain out of sight. If he takes too much damage, he can escape from the ink that consumes him and respawn at one of the numerous statues of Bendy that act as checkpoints.

In addition, players can find numerous audio logs throughout the studio that give more details about the game's story, particularly concerning the fate of the studio and its employees, similar to the systems used in games such as BioShock. Some of these logs can be missed and require further exploration to uncover the secret areas they often reside In.

While the game was highly acclaimed by the community, the critic reviews are largely mixed, with aggregating review website GameRankings assigning the PlayStation 4 port a score of 77.50%,[1] the Xbox One for 75.00%,[2] and Nintendo Switch for 65.00%,[3] but the original PC was not received yet.[4] The critic review from Metacritic was not received yet. It receives praise centering on its vintage aesthetic and story. In the months following its release, it quickly gained a cult following from exposure on platforms like YouTube and Twitch. The game has received the "Best Horror Game" award by IGN and is listed as #1 in "18 Best Horror Games of 2017", while its percent score didn't receive from the site yet.[5] The mobile port received the "Game of the Day" award on February 23, 2019.[6] 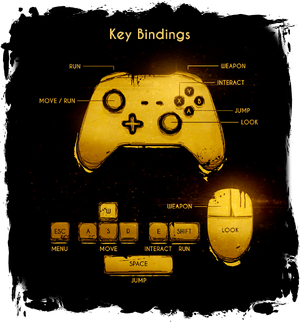 "Above all, fear the Lord and worship Him faithfully with all your heart; consider the great things He has done for you." - Samuel 12:24 (HCSB)

Retrieved from "https://bendy.fandom.com/wiki/Bendy_and_the_Ink_Machine?oldid=139875"
Community content is available under CC-BY-SA unless otherwise noted.