watch 03:41
Wiki Targeted (Games)
Do you like this video?
Play Sound

Respawning
The Bendy Statue is a life-sized sculpture of Bendy in Bendy and the Ink Machine, first introduced in Chapter 2: The Old Song and reappeared in the later three chapters. It serves as a respawn point for Henry after he dies.

The Bendy Statue is a solid stone statue of Bendy himself that is twice as tall as Henry. It yellow in color with scratches all over it. Dark ambience along with various low whispering sounds is heard upon approaching one Bendy statue closer.

Those that do not act like respawning points but just as a part of the environment come in many different sizes; some are small while others appear surprisingly huge.

Whenever Henry is killed by an enemy, he will respawn inside the mysterious tunnel made out of ink with whispering voices and a glowing light at the end. Making his way to the light will cause Henry to come directly out of the Bendy statue, back to progress his journey.

The statue of Bendy in the T-Shaped corridor.

Giant statue in the Inky Abbys. 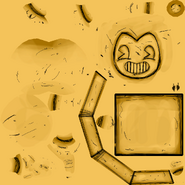 The statue of Bendy seen in the first teaser for Chapter 4. 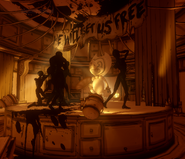 Henry viewing the Lost Ones and the statue.

A statue behind the pile of empty Bacon Soup cans when using hacks.

A statue from the Maintenance.

A statue in the ballroom.

Another view of the Lost Ones and the statue.

A Bendy statue in the Chapter 5 trailer (behind a Lost One's leg).

A Bendy statue inside a wall.

Another Bendy statue hidden in the Lost Harbor.

A Bendy statue located to the left in the Industrial Maze.
Add a photo to this gallery
Retrieved from "https://bendy.fandom.com/wiki/Bendy_Statue?oldid=144083"
Community content is available under CC-BY-SA unless otherwise noted.