Meadowlands, New Jersey
Bendy Land, also known as Bendyland, is an establishment and a theme park based on Bendy's series of cartoons and characters by Joey Drew Studios, constructed and owned by Bertrum Piedmont with the help of Lacie Benton.

Bendy Land was mentioned in Chapter 4: Colossal Wonders of Bendy and the Ink Machine and there is a huge numerous amount of attraction pieces and rides based on the said amusement park, found in the storage 9 warehouse and other locations connected to this warehouse.

Given his departure from Joey Drew Studios 30 years earlier, Henry never knew the existence of the amusement park prior to Chapter 4.

Based in the Meadowlands of southern New Jersey, Bendy Land was to be Bertrum's latest theme park attraction in a line of parks he constructed for 40 years, a feat that Bertrum is proud of.[1] While Bendy Land is a huge success with Bertrum's hard work, he was disappointingly mad that the studio's owner Joey Drew tried to steal credit for the amusement park. According to a stack of Bendy Land ride tickets found in Joey Drew's apartment, Bendy Land was open sometime before Joey Drew Studios closed down.

Bendy Land is a colossal-sized amusement park separated into four main parts: Light Land (north-west side), Big Land (north-east side), Dark Land (south-west side), and Tiny Land (south-east side). Every four separated lands have a tower from the circle path. The center location of Bendy Land is the main tower along with three stages in front of it. The main entrance is located on the south, two more entrances on both west and east directions, and the office found up north. The midway street is located from south to north. Attractions include motion rides, Bendy-themed food and drinks, and costumed characters.

There are only 2 known employees working for the Bendy Land staff, although there are likely more, as building a theme park is a lot of work.

Better known as the Haunted House, it is a dark ride of Bendy Land, and the only theme park ride so far found in-game. Outside of this ride seems to turn out to be a living Haunted House, with sharp teeth under the top of the porch as well as cartoon pie eyes in place of both windows on the rooftop.

This ride also seems to be a reference to the Disney park ride Haunted Mansion.

As it was only mentioned in an advertisement poster, the big picture for the purpose of this ride is unknown.

The name of this ride is a reference to the whip-poor-will, a bird related to Nightjars from the Eastern areas of North America.

This was supposed to be a boat ride. Judging by ducks seen in the ride's advertisement poster, the cartoon duck heads found in-game were previously used for the ride, indicating the ride may have been scrapped.

Hence its name, this is a carousel of Bendy Land. The carousel horse ride-seats, by the name of Horsey, that were found in-game are used for the Devil's Carousel ride, hinted by the silhouetted horses seen in the said ride's advertisement poster.

Also known as the Bendy Land Railroad and Boris Express, it is a railroad train ride of Bendy Land. There are few Bendy-faced trains of the Buddy Boris Railway ride found in the Maintenance room.

There is not much noteworthy about this other than turning out like a battleship exhibition of Bendy Land.

Mentioned in the notepapers from the epilogue after Chapter 5: The Last Reel where it took place in Joey Drew's apartment, there is a swing ride listed along with other known rides. Considering the ride's name, the ride foreshadows Bertrum's monster form in Chapter 4: Colossal Wonders.

The main tower is located at the center of Bendy Land, according to the map. Seen in few drawings, the structure of this tower bears a strong resemblance to between the Empire State Building and the rebuilt One World Trade Center of New York City, with Bendy's head printing on all every four sides. Connecting across the top of this tower is what appears to be an aerial tramway ride. In front of the tower are three audience booths.

There is an unidentified ride or attraction of Bendy Land, hinted by one of the sketch drawings. The outside resembles a castle fortress with a gigantically wide entrance. On top of this ride/attraction, between a total of two torch pedestals, is Bendy himself sporting a pair of large bat-like wings, with their position seems to take the shape of Bendy's own horns. 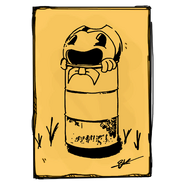 A drawing of the Bendy trash can. 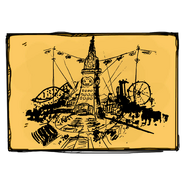 A drawing of the main center of Bendy Land. 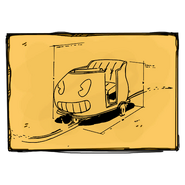 A drawing of the roller coaster cart. 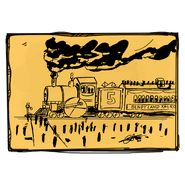 A drawing of the train. 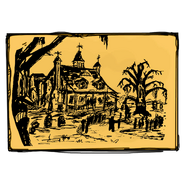 A drawing of the Haunted House. 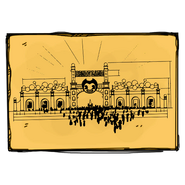 A drawing of the Bendy Land entrance.

Bendy Land's logo in the "Chills and Thrills" fanart for official T-shirts by Nick Gann and was promoted in Bendy in Nightmare Run following the update.