Traversing the Ink River
The Barge is water vehicle used in Chapter 5: The Last Reel of Bendy and the Ink Machine. It is used in the ink river to traverse the area.

The barge is made up of plywood boards, drum barrels, corrugated metal, and stage lights. The control panel is made up of toggle/handle switches for the throttle and startup. At the back of the barge is a wooden paddlewheel, which needs to be cleaned often when it gets clogged with thick ink.

Upon reaching the barge port, Allison and Tom can be seen in the distance driving away in the barge, to follow them, Henry must drop the second barge into the ink river and enter it.

To activate the barge, Henry must press the button before riding. Afterwards, he must hold down on the throttle to move through the tunnels of the river.

Later on, the paddlewheel will clog with thick ink, forcing Henry to smack the ink away with the Gent pipe, while the Giant Bendy Hand appears and drag Allison and Tom's empty barge under the ink, after which it'll start following Henry's barge. 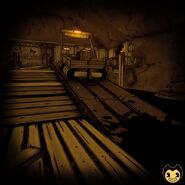 The official screenshot of the barge.

The barge near the Giant Bendy Hand.

The barge in the "Swimm'ink Pool" fanart for official T-shirts by SKY-Lia.
Community content is available under CC-BY-SA unless otherwise noted.
Advertisement