This article is about audio log device. For a similar item in Boris and the Dark Survival, see Tape.

Audio logs, also known as cassette players and tapes, are recording devices littered around the Cycle of the Bendy series. These narrative tapes are recorded from employees of Joey Drew Studios and are seen scattered in multiple areas. The name of the audio log's production brand is unknown.

The audio logs are considered to be diary tapes recorded by multiple employees of Joey's animation studio. Interacting with each one displays the transcript while playing the recorded voice of a studio employee describing their thoughts and events of the studio from the past, which also gives out lore behind the studio and elsewhere, as well as some hints for the protagonist's current goal. For example, In chapter 2 of the game, Henry found Wally's audio log hinting about finding the keys. Then, Sammy then said later in chapter 2 that Henry could use the instruments to get to the valve. 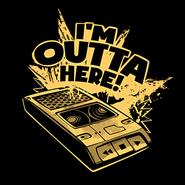 An official merchandise design that features the cassette, along with one of Wally's quotes.

Português do Brasil
Community content is available under CC-BY-SA unless otherwise noted.
Advertisement