Bertrum Piedmont (monster)
Striker (corpse)
The Attraction Storage is a location from Chapter 4 of Bendy and the Ink Machine. This is the location where Bertrum's monster form is encountered.

The attraction storage room was built to store finished rides and attractions for the Bendy Land joint project between Joey Drew and Bertrum Piedmont.

The main area is a large, hollow dome, used for housing fixated rides and attractions. Industrial shelving units line the walls, with several other props and park fixations stored within them. Lying limp and in wait in the middle of the room is none other than Bertrum Piedmont himself, who is fought and quickly killed.

This room is the final piece of the puzzle to powering up the Haunted House, but was guarded by the monster form of Bertrum and Henry must kill him, before he can pull the switch. 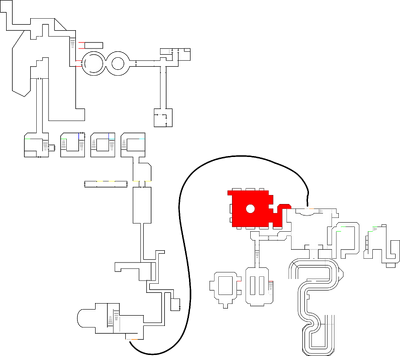 The corpse of Striker and the Bacon Soup can.

Ditto, but seen in the trailer.

The second Bacon Soup can.

Bertrum activated in the room.

Henry riding one of Bertrum's arms.

The third Bacon Soup can.

Some decorations of the room.

The switch accessed at the end of the battle. 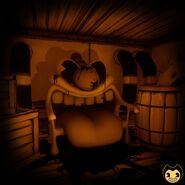 The official screenshot of the clown chair from the attraction storage. 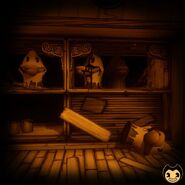 The official screenshot of the duck heads in the shelf within the attraction storage. 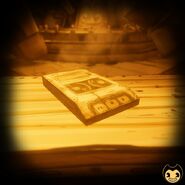 The official screenshot of Bertrum's audio log from this location. 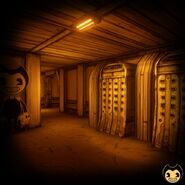 The official screenshot of the corridor leading to this location. 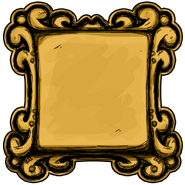 The signs for the attractions in the dome area. 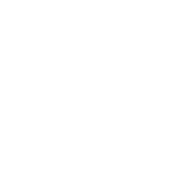 The secret "AGAIN & AGAIN, AROUND & AROUND" message in Prop Storage #1. 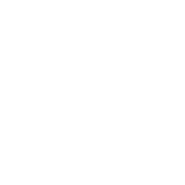 The secret "TIME WOUNDS ALL HEELS" message in the dome room.