The action figures are toys sold in stores, made by the company PhatMojo. Based on the characters of Bendy and the Ink Machine and the upcoming Bendy and the Dark Revival, they can be found in stores like Walmart, Target, etc.

Each currently 3 series include 4 separate action figures that comes with few item accessories. Additionally, yellow versions of the first 2 series, including a Dead Boris Clone was released early in stores like Smythstoys in the UK. 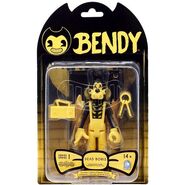